Resource allocation measurement assumes that every node has one unit of resources, and allocates the resources evenly to all neighbor nodes, thus the closeness of two nodes can be described by the size of resources one node allocates to the other node. This is proposed by Tao Zhou、Linyuan Lü and Yi-Cheng Zhang in 2009:

Taking the above graph as an example, the score of resource allocation of the blue and red node is the sum of the reciprocal of neighbors of the yellow and green node, which is 1/4 + 1/3 = 0.5833. 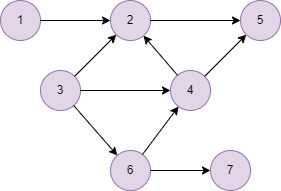 Algorithm results: Calculate the Resource Allocation between node 3 and other nodes, return node1, node2 and num

Example: Calculate the Resource Allocation of node UUID = 3 and all other nodes, write the algorithm results back to file named ra

Example: Calculate the Resource Allocation of node UUID = 1 and UUID = 5,6,7, return the results in the descending closeness score