Node2Vec graph embedding algorithm takes both the BFS and DFS neighborhood of node into consideration, node sequences are generated through a biased second-order random walk and sent to the Skip-gram model, which was originally proposed in Word2Vec algorithm, to train node embeddings. Node2Vec was proposed by A. Grover and J. Leskovec of Stanford University in 2016.

Related materials of the algorithm: 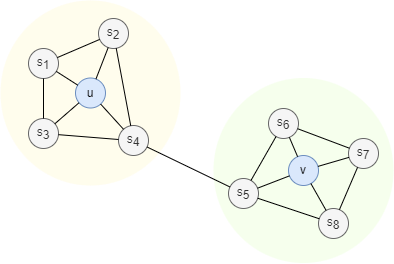 Neighbors of a node often share similar features (properties) with the node, which is referred as homophily. Classically, in a social network, a user (node) and his friends (neighbors) are expected to have similar interests, age and so on. Nodes with homophily are usually found close to each other in the network. In the graph above, nodes u, s1, s2, s3 and s4 are in the same community or cluster and have homophily.

Compared with the horizontal (breadth) first search of BFS, DFS (Depth First Search) is a vertical (depth) first search, which starts from the current node for a deep exploration until reaches the maximum limited search depth, only then it will return to the previous layer to continue the search. The search stops until a certain node or edge is found, or the whole graph is traversed.

In classic random walk, by default each edge has the same probability to be picked (as detailed in chapter Random Walk), and the next node chosen by the current node is not affected by previous visited nodes. The so-called Second-order Random Walk (or RW2 in short) refers to the random walk that takes the previous visited nodes into consideration when selecting the next node to visit.

Node2Vec introduces two parameters p and q to control whether the walk is more BFS or DFS. Assuming a node walks from t to v and v has neighbor node x, the weight of the adjacent edges of v are influenced by the shortest distance d between t and x, and it is done with the parameters p and q: 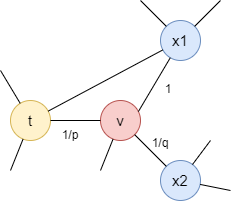 The probability of the current node walking along each adjacent edge is then obtained after normalizing the influenced weight of each edge.

In 2014. B. Perozzi et al. proposed the DeepWalk graph embedding algorithm, they first applied the deep learning technology which was widely used in NLP field to network analytics. DeepWalk generalizes language modeling to the process of exploring graph through random walks, it treats the walk sequences as special kind of phrases. Similarly, Node2Vec uses the Skip-gram language model and SGD to train walk sequences to get the node embeddings in vector space and optimizes the training process with negative sampling and so on.

Lonely node has no adjacent node, hence it cannot walk to other nodes; lonely node can only walk along its self-loop edge if there is one. The walk paths of non-lonely nodes will not have any lonely node.

Node only walks within its own connected component.

Node may walk along its self-loop edge.

For directed edges, Node2Vec algorithm ignores the direction of edges but calculates them as undirected edges.