A k-Core in a graph is a subgraph in which all the nodes in that subgraph have degree no less than k. k-Core algorithm is commonly used to identify and extract the closely connected groups in the graph for further analysis, and are widely used in research fields such as financial risk control, social network and biology due to its low time complexity (liner) and good intuitive interpretability.

A k-Core of a graph refers to the subgraph generated by iteratively removing nodes whose degree (self-loop edges are ignored) is less than k. The calculation is an iteratively pruning process, nodes with degree no less than k before a certain round of pruning may become less than k after the round.

And once again, in the k-Core algorithm, self-loop edges of node have no contribution to the degree of the node.

Start from the graph on the left, the minimum degree of all nodes is 1, so the graph is 1-Core of itself; in order to obtain the 2-Core, all nodes with degree equals to 1, which are 1, 6 and 7, are removed, so that the graph in the middle. And after removing nodes 6 and 7, the degree of node 4 decreases to 1, thus it has to be removed too. The rest nodes in the subgraph on the right all have degree of 2, so the 2-Core of the original graph contains nodes 2, 3 and 5.

If a node belongs to the k-Core of a graph, but it is not included in the (k+1)-Core, then this node is considered to have the coreness of k.

Self-loop edge does not participate in the calculation of k-Core.

Take the graph below as an example, run the k-Core algorithm: 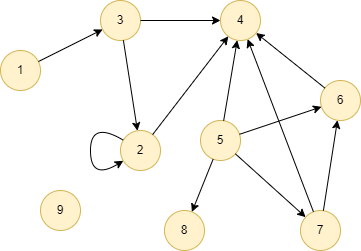 Algorithm results: Given k=3, return the node list of its 3-Core subgraph