Gradient descent is an optimization algorithm which is commonly used in machine learning, it is a technique to find the minimum value of a function.

For single-variable function f(x), derivative is the slope of tangent line at one point, which represents the rate of change of the function at that point. As shown below, the function's derivative at x = x0 is (if ∆x→0 exists, this conditions shall not be restated hereafter): 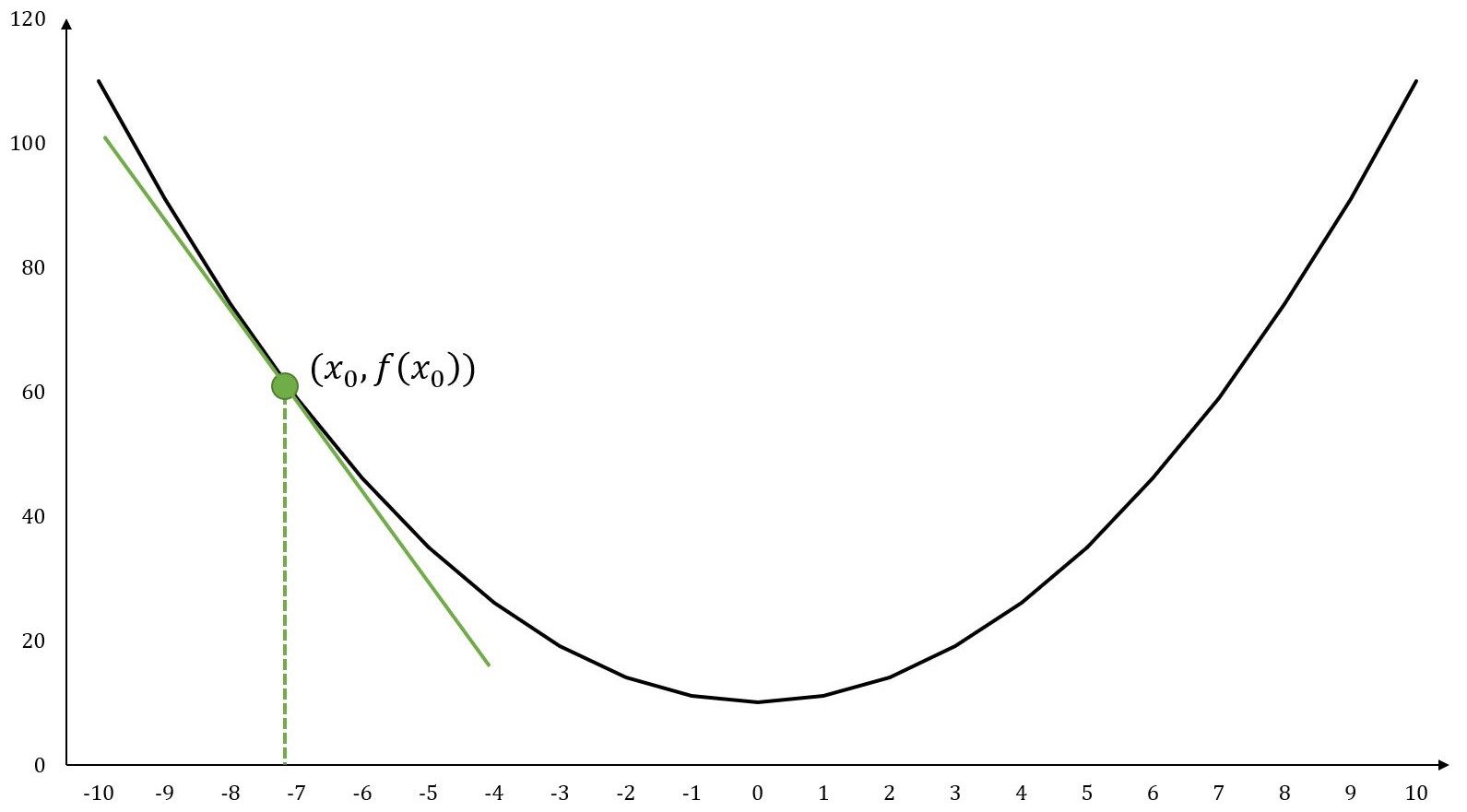 Tangent line to a plane curve at a given point is the straight line that 'just touches' the curve at that point, and the direction of the tangent line is the same as the point.

Taking two-variable function z = f(x,y) as an example, for any point (x0,y0,z0) on the function's curved surface, its projection on the XY plane is point (x0,y0). Draw a unit circle with (x0,y0) as the center of the circle, the unit vector (denoted as u) formed by any point on the circle and (x0,y0) can express direction. In particular, when the direction coincides with the positive direction of the coordinate axis, directional derivative is partial derivative.

Directional derivative in any direction is linear combination of partial derivatives. It has been proven that the gradient (denoted ∇f) of the multi-variable function f(x1,x 2,...,xn) is

Take a real-life example: let's say we are on a mountain and wish to go down as fast as possible. Of course, there must be a best route, but usually it is costly to find that very path. It is more common to take one step at a time. In another word, each time we reach a new position, calculate the direction (gradient) in which we can go down the fastest, and go to the next position in that direction. Repeat this process until we reach the foot of the mountain.

Given a function J(θ), the basic form of gradient descent is:

where ∇J is the gradient of function at the position of θ, η is the learning rate. As gradient is actually the quickest direction the function value ascends, the minus before η∇J represents the opposite direction of gradient.

If starts from position θ0 = 1, with learning rate η = 0.2, based on the gradient descent formula, the next movements would be:

With the number of steps increasing, we infinitely approach position θ = 0 which brings the minimum value of the function.

With the number of steps increasing, we infinitely approach position Θ = (0,0) which brings the minimum value of the function.

In the learning and training of neural network model, a loss/cost function J(Θ) is often employed to evaluate the error between output of the model and the expected result, gradient descent technique is then used to minimize this loss function, i.e, repetitively updating the parameters of the model in the opposite direction of gradient ∇J(Θ) until convergence so as to optimize the model. For the balance of computation time and accuracy, there are some variant forms of gradient descent that have been used in practices, including:

Hypothesis is a target function that describes the mappings of inputs to outputs in machine learning. In this example, any change to the parameter θj (j=0,1,...,n) would result in changes to the outputs of the model. The goal of model training is to find the optimal θj that makes the outputs to be as close as possible to the expected values. In the beginning of the training, θj is randomly initialized.

Let's use the mean square error (MSE) as the loss/cost function J(Θ) to describe the average error between each expected value and the output:

Denominator in the standard MSE is 1/m, 1/2m is used in machine learning instead to offset the square when the loss function is derived, constant coefficient is thus eliminated for the convenience of subsequent calculations. The results will not be affected in this way.

where η is the learning rate. The sum symbol shows that all m samples will participate in each iteration to update the parameters. Obviously, the training process will be slow when m is considerable large.

Stochastic gradient descent (SGD) is theoretically similar to BGD, while SGD selects only one sample for each iteration to speed up the training process.

The computation complexity is reduced because SGD uses only one sample and skips the process of summation and averaging, computation speed is improved with the cost of some accuracy.

The two methods above both take extremes, either they involve all samples or only one sample. Mini-batch gradient descent (MBGD) serves as a compromise approach by selecting 1 < x < m samples randomly to perform the computation.

Previous: What is Graph Embedding
Next: Backpropagation
All
| close