K-Hop Whole Graph algorithm calculates the number of K-hop neighbors for each node and returns those neighbors. The algorithm is widely used in scenarios such as relationship discovery, impact prediction and friend suggestion and so on.

K-Hop Whole Graph can be viewed as the batch execution of UQL command khop(). Although Ultipa has optimized the K-Hop Whole Graph algorithm for high concurrency performance, massive system resources can still be consumed by the algorithm in large graphs (over tens of millions nodes and edges) or graphs with many super nodes. Therefore, it is recommended to avoid performing K-Hop Whole Graph calculation that is too deep.

In a graph which nodes/edges = 100, the theoretical computation amount required to query 5-hop neighbors of a node is 105 (10 billion computational complexity) and it would take 100ms; then 1 million seconds (12 days) are needed to complete such query in a graph of 10 million nodes. 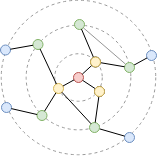 Starting from the red node and traversing by the BFS principle, the yellow, green, blue nodes are found in succession. Color of these nodes is classified by the distance to the start node, that is, the number of edges of the shortest path(s) from the start node to them. This distance is what the K means in K-Hop query, which is the K-hop neighbors of the start node.

Once the start node is given, K values of the other nodes in the graph are also determined. In other words, if a node is the 5th level neighbor of the start node, then it is impossible to appear in the 4th, 6th or other levels.

K-Hop query in directed graph can be restrained by the direction of the edge where the neighbor is located, this is when some nodes do not have K values and not all nodes are found in the traversal result.

Starting from the red node in the directed graph on the left side, and traversing by the outbound edges and inbound edges; two distinct traversal results are obtained, the purple node does not belong to any level when traversing in the inbound direction and its K value does not exist.

Lonely node will not appear in any K-Hop query result.

For disconnected graph, only nodes belong to the same connected component with the start node are involved in the K-Hop query result, while other nodes cannot be traversed.

Each node is traversed only once in K-Hop query, so the self-loop edge of node can be considered invalid.

Take the transaction graph below as an example, the color of card represent its level, run the K-Hop Whole Graph algorithm against all nodes:

Algorithm results: Calculate 1-hop neighbors for each node and count the maximum level of the results, return _id, value or _uuid, value according to the execution method, column value includes the aggregative counting result(s) and the number of neighbors

Example: Calculate the number of 2-hop neighbors in the outbound direction of all nodes

Example: Calculate 2-hop neighbors of all nodes, write the number of neighbors back to node property named khop2

Example: Calculate 1-hop to 3-hop neighbors of node UUID = 3 and aggregatively count the maximum value of property @card.level of the results, and return only the aggregative counting result and the number of neighbors