Skip-gram (SG) model, or continuous Skip-gram model, is originated from the Word2Vec algorithm in NLP (Natural Language Processing) field. Word2Vec embeds words to vector space, and words that are semantically similar have closer locations in vector space. Word2Vec was proposed by T. Mikolov et al. of Google in 2013, it actually includes two models - Skip-gram and CBOW. Related materials of the algorithm are:

In the graph embedding field, DeepWalk, which came out in 2014, was the first one to apply Skip-gram model to the training of vector representations of nodes in graph. The key idea is: node is viewed as 'word', node sequence generated by random walk is viewed as 'sentence', a series of node sequences forms the 'corpus'; input the 'corpus' into Skip-gram model for training to get the vector representations of nodes. Related material of the algorithm is:

Graph embedding algorithms that were proposed later, such as Node2Vec and Struc2Vec, have improved DeepWalk while still using Skip-gram.

We will introduce Skip-gram using the natural language of its original application as an example.

The basic mechanism of Skip-gram is to predict several context words of a given target word. As shown in the diagram below: input word w(t) into model, then it outputs 4 context words of w(t): w(t-2), w(t-1), w(t+1), and w(t+2); where +/- represents context before and after the target word, the number of output context words is adjustable. 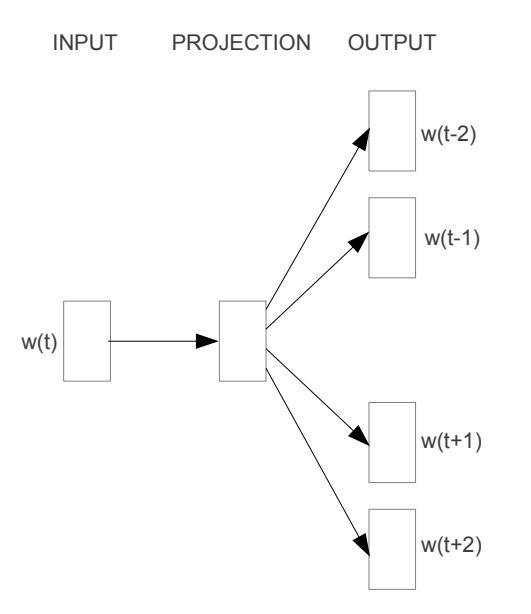 Assume that the corpus contains 10 words:

and a series of sentences of these words, one of the sentences is:

Graph is a good way to visualize data.

Words cannot enter into the model directly, they have to be complied into machine codes. Skip-gram adopts one-hot encoding to preprocess words. In our example, the one-hot encodings of the 10 words are: 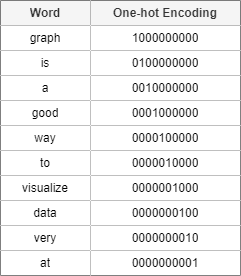 Below is a detailed illustration of Skip-gram model: 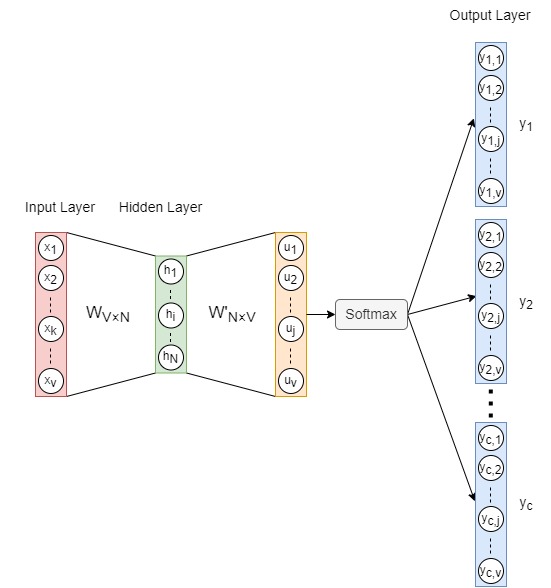 About weighted matrix: Each row of matrix W (vw) is the N-dimensional embedding vector of a word (the order of rows is consistent with the order of one-hot encodings), vw is called the input vector of word. Each column of matrix W' (v'w) can be regarded as another N-dimensional vector representation of word (the order of columns is consistent with the order of one-hot encodings), v'w is called the output vector of word. Both matrices are initialized with random values. W and W' are different, W' is not the transpose of W. The training of model is to update weights of both matrices recursively with the ultimate goal of obtaining matrix W.

About Softmax function：Softmax is an activation function, which normalizes a numeric vector to a probability distribution vector with the sum of all probabilities as 1. The formula is:

Take the training samples (is, graph) and (is, a) as example:

Hidden layer vector h is obtained by multiplying vector x and matrix W's transpose WT. Since x is a one-hot vector, i.e., xk = 1 while all other components are 0, this operation can be regarded as to extract the vector in the k-th row from matrix W without calculation.

Vector u is obtained by multiplying vector h and the transpose of W':

Every component (uj) of vector u can be taken as a score, and it produces the final output vector y with Softmax:

Each component of vector y represents the probability of each word being output when the input x is given, the sum of all probabilities is 1 (same order with one-hot encodings).

In this example, the two words with the highest probabilities are 'good' and 'visualize', which are the two context words the model outputs this time. They are different from the expected outputs 'graph' and 'a', and we will then adjust weights of matrices W and W' via backpropagation.

We start from the simplest version, we assume that model only outputs one vector y. yj represents the j-th component of vector y, i.e., the probability of outputting the j-th word in the corpus. Suppose that the expected output is the j*-th word, then the goal of model training would be to maximize yj*:

In machine learning, it is often easier to target at minimization rather than maximization, hence we perform some transform to the goal above:

The goal is not affected by taking the logarithm of yj, and since yj ∈(0,1), its logarithm is negative, thus we can transform it into a minimization problem.

Then we get the loss function of the model:

Take the partial derivative of E with regard to uj, and define the result as ej：

It is advised that readers be familiar with calculating derivatives of logarithmic and exponential functions.

Consider about the real meaning of ej. Take the training sample (is, graph) as example, the expected output 'graph' is at the first position, hence we have:

The output vector y in this example is as followed, where y4 is the greatest, i.e., the model actually outputs the 4th word 'good'. And we notice that the calculation of ej is equivalent to deduct the one-hot vector from the output vector y, therefore, ej is the prediction error of the model. 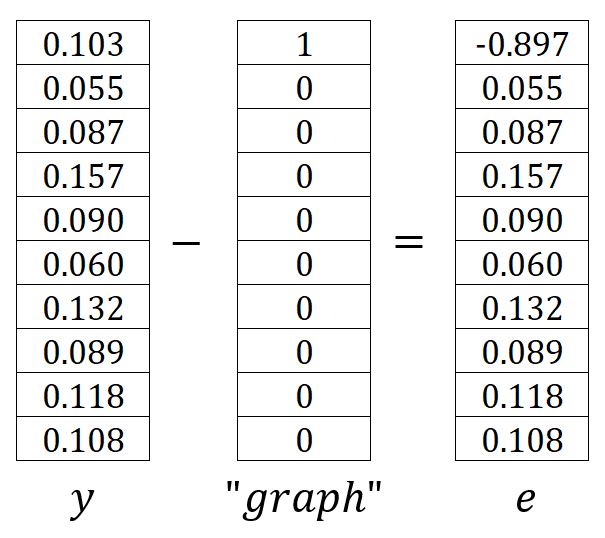 When outputing multiple vectors, yc,j represents the j-th component of the c-th vector yc, similarly, it is the probability of thr j-th word in the corpus being output. As aforementioned, all sampling results in the sliding window are equal. For C context words, the goal of model training is to maximize every probability of the context word, i.e., to maximize the product of these probabilities:

Similarly, we get the loss function E after the transformation:

Take the partial derivative of E with regard to uj:

This means that when outputting multiple context words, the prediction error of the model is equal to the sum of errors of predicting single context word.

During backpropagation, we adjust parameters of the model, i.e., weights of matrices W and W'. Skip-gram adopts stochastic gradient descent (SGD) to update weights. Samples above are still used in this section.

If readers are not familiar with gradient descent, it is recommended to read - Gradient Descent.

Matrix W' is between the output layer and hidden layer, we need to calculate how much influence w'ij imposes on E by taking the partial derivative of E with regard to w'ij by the chain rule:

Therefore, according to learning rate η∈(0,1), we adjust w'ij:

Vector h can be simply obtained by looking up the table, but in order to calculate the partial derivative, we can use the equivalent formula below:

Matrix W is between the hidden layer and input layer, we can calculate how much influence wki imposes on E by taking the partial derivatie of E with regard to wki by the chain rule: