Different minimum spanning trees may exist for one graph, Ultipa's MST algorithm only calculates and returns one of them.

For a connected graph with n nodes, its minimum connected subgraph consists of n nodes and n-1 edges of the graph; these edges connect all n nodes, and if removes any one edge, the n nodes will not be connected anymore; these n-1 edges form a MST of the graph.

The connected graph below has 11 nodes, the 10 edges highlighted in green form a MST of this graph: 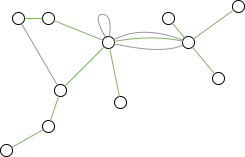 Minimum connected subgraph must not have 1) circle, 2) self-loop edge and 3) multiple edges between two nodes. Redraw this graph according to these features as below: 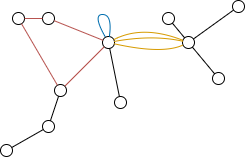 One MST can be obtained by 1) removing one edge in the red circle, 2) removing the blue self-loop edge and 3) keeping any one edge among the 3 yellow edges. There are 4 * 3 = 12 possible MSTs of this graph.

Weighted MST is calculated by adding all edge weights of the MST up and keep the MST with the lowest weight sum. The number of MSTs may reduce when taking weight into account, but there still may exist multiple MSTs. 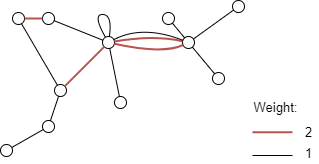 As the above graph shows, given that the weight of red edge is 2 and the weight of black edge is 1, then this graph has 2 weighted MST solutions, each are indicated in green, and the sums of weight are both 9 *1 + 1 * 2 = 11.

Ultipa's MST algorithm only calculate weighted MST for the real applications. If ignores edge weight, then any spanning tree is a minimum spanning tree.

Lonely node does not participate in the calculation of MST.

In disconnected graph, MST is calculated for each connected component which has a start node specified.

Self-loop edge does not participate in the calculation of MST.

Take the graph below as an example, node 1 is an electric center, node 2~8 are 7 villages around the center, the number of kilometers marked on each edge represents the distance between two locations (i.e. the required cable length), run the MST algorithm to find the lowest cost cabling solution:

Algorithm results: Specify node 1 as the start node, and use the property distance as weight, return the MST (1-hop path)

So the lowest cost cabling solution is as below:

Example: Start from node UUID = 1, use edge property distance as weight to calculate MST, i.e. use the 'shortest distance' to connect all nodes

Example: Start from node UUID = 1, use edge property distance as weight to calculate MST, write the algorithm results back to file named solution

Example: Start from node UUID = 1, use edge property distance as weight to calculate MST, return the sum of distance of all edges in the MST