Bipartite algorithm judges if the current graph is a bipartite graph and returns the result. The concept of bipartite graph is widely used in scenarios such as resources allocation and grouping optimization.

Bipartite graph is also known as bigragh. If divides all nodes in a graph into sets A and B, the two endpoints i and j of each edge in the graph belong to each set, i.e. i ∈ A and j ∈ B, or i ∈ B and j ∈ A, then the graph is called a bipartite graph.

As shown in the above graph, after dividing nodes in the graph into two groups of 'yellow, red, purple' and 'blue, grey, green', there is no edge in the groups, but all edges exist between groups, thus we say that the original graph is a bipartite graph.

A cycle with even nodes is called an Even Cycle, a cycle with odd nodes is called an Odd Cycle. Reasoning from the example above: Cycles in bipartite graph must all be even cycles. Because when the curve crosses the edges of an even cycle in turn, the start and end points of the curve are on the same side of the cycle (inside or outside); however, odd cycle causes the start and end points of the curve on different sides of the cycle, so the curve has to intersect with one edge twice to close itself.

In the example above, Graph A and B are colored successfully, but Graph C fails. The coloring method proves the previous reasoning of 'Even Cycle' from another perspective: When coloring nodes along the cycle, even cycle ensures that the nodes are alternately colored in different colors, while the first and last nodes in odd cycle have to use the same color.

Introducing pure lonely node (without self-loop edge) into graph does not affect the bipartition of the original graph.

For directed edges, Bipartite algorithm ignores the direction of edges but calculates them as undirected edges.

Take the graph below as an example, run the Bipartite algorithm: 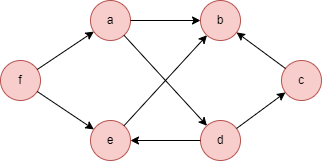 Example: Examine if the current graph is bipartite graph, define algorithm statistics as alias named result, and return the statistics

Example: Examine if the current graph is bipartite graph, define algorithm statistics as alias named result, and return the statistics