Graph average distance is defined as the average length of the shortest paths of all node pairs, it can be used to describe the compactness of the graph. In the early days, this concept was used to evaluate the design of building floors and study the structure of chemical molecular and so on. Gradually, it is applied to the analysis and design of computer system and communication network.

The theoretical value of the graph average distance can be solved by the Neighborhood Function. Since the neighborhood function is very resource intensive when running on large graphs, ANF (Approximate Neighborhood Function) algorithm and HyperANF algorithm - a breakthrough improvement over ANF in terms of speed and linear scalability - were emerged. HyperANF was proposed in 2011 by Paolo Boldi, Marco Rosa and Sebastiano Vigna of the Department of Information Science at the University of Milan, Italy.

Related materials of the algorithm:

So far, the solution of the graph average distance can be converted into the calculation of Nx(t).

Taking connected graph as an example, according to the concepts introduced earlier, graph average distance can be calculated by the size of neighborhood set |B(x,t)|:

HyperLogLog is a cardinality estimation method that counts the cardinality of a sequence after reading its elements. The size of the memory it occupies when computing is a near-linear double logarithm O(n·log(log n)), hence the name.

Ultipa's HyperANF algorithm prepares an array M for each node x in the graph to calculate |B(x,t)|, the number of nodes in the neighborhood set of node x, n M arrays are needed for n nodes; define C as the n × m-dimensional matrix of these arrays:

Starting from t = 1, calculate C(t) iteratively; each Mx in C(t) is the maximum element taken from the same subscript from multiple My in C(t-1) (y is all 1-step neighbors of x). Looping iteratively until C(t) no longer changes or the number of iterations reaches the limit.

Lonely node is not connected with any other node, it does not participate in the calculation of graph average distance.

Connected node pairs are found in each connected component in disconnected graph, graph average distance is calculated by these node pairs jointly.

Self-loop edge does not form the shortest paths between nodes, thus has no impact on the calculation of graph average distance.

For directed edges, HyperANF algorithm ignores the direction of edges but calculates them as undirected edges.

Take the graph below as an example, run the HyperANF algorithm in the graph, set to run 5 iterations the maximum, and the length of array M is 24, i.e. b = 4: 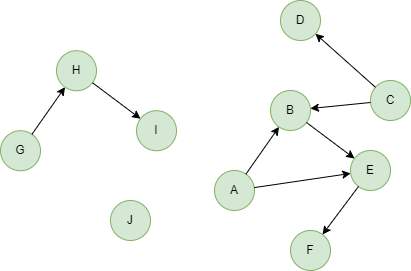 Example: Calculate graph average distance, set to run 5 iterations the maximum, and the length of array M is 24, i.e. b = 4, define algorithm statistics as alias named distance, and return the statistics

Example: Calculate graph average distance, set to run 5 iterations the maximum, and the length of array M is 24, i.e. b = 4, define algorithm statistics as alias named distance, and return the statistics