How to Read Graph DB Benchmarks (Part 1 of 2)

The main goal of this article is to introduce basic knowledge about graph database, graph computing and analytics, and to help readers interpret benchmark testing reports, and to validate if the results are correct and sensible.

There are mainly 2 types of data operations in any graph database:

High-dimensional data manipulation poses as a key difference between graph database and other types of DBMS, we’ll focus on examining this unique feature of graph DB across the entire article.

There are 3 main types of high-dimensional data operations, which are frequently encountered in most benchmark testing reports:

Most benchmark reports are reluctant to disclose how high-dimensional data operations are implemented, and this vagueness has created lots of trouble for readers to better understand graph technology. We hereby clarify, there are ONLY 3 types of implementations in terms of how graph data is traversed:

Graph 1 illustrates the traversal difference between BFS and DFS. In short, under BFS mode, if qualified 1st hop neighbors are not all visited first, the access to any 2nd hop neighbor will not start, and traversal will continue in this way until all data(neighbors) are visited hop after hop. Based on such description, it’s not hard to tell that if a certain K-hop or shortest-path query only returns a pre-defined limited number of neighbors or paths (say, 1 or 10), it’s guaranteed that the query implementation is wrong! Because you do NOT know the total number of qualified neighbors or paths beforehand. 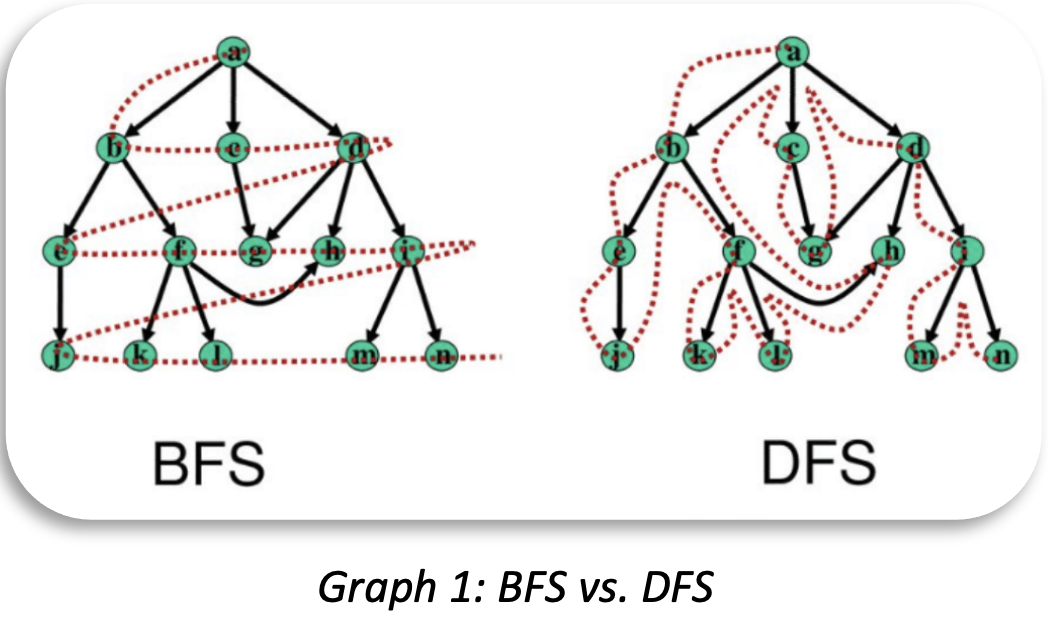 There are 3 types of datasets for graph system benchmarking:

As graph database and computing technologies and products continue to evolve, it’s not hard to see that more graph datasets will emerge and better reflect real-world scenarios and business challenges.

Twitter-2010 (42 Million vertices, 1.47 Billion edges, sized at 25GB, downloadable from http://an.kaist.ac.kr/traces/WWW2010.html) is commonly used in benchmarking, we’ll use it as a level playing field to explain how to interpret a benchmark report and how to validate results in the report.

Before we start, let’s get ourselves familiar with a few concepts in graph data modeling by using the Twitter dataset as an example: 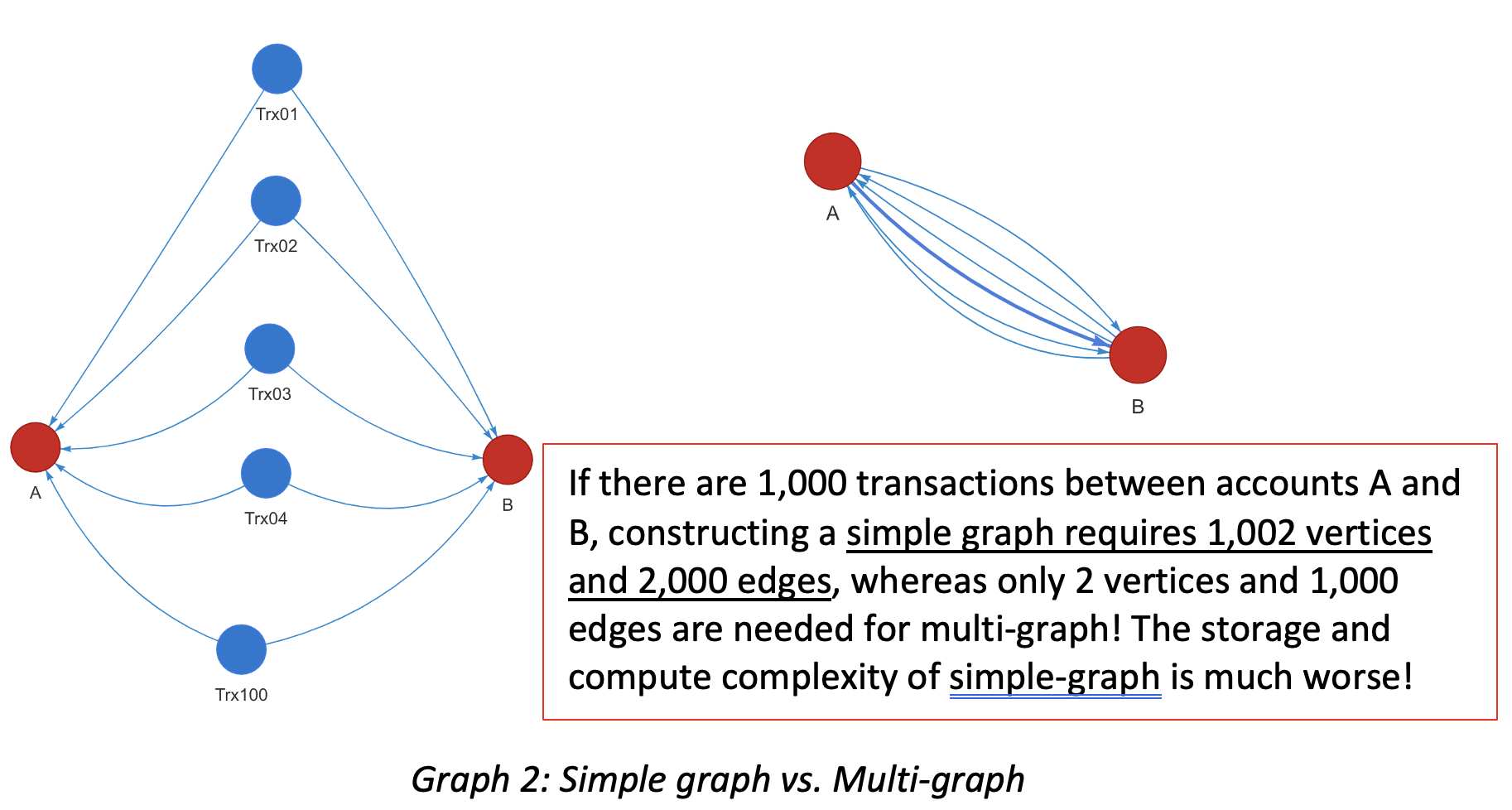 Generally speaking, there are at least 5 parts of a graph database benchmark report:

Most benchmark reports would cover the first 3 parts, but not  the 4th or 5th parts – the 4th part reflects if the subject database is more of the OLTP/HTAP type or OLAP focused, with the main difference lying at the capability to process dynamically changing datasets. Clearly, if a graph system claims to be capable of OLTP/HTAP, it must allow data to be updated and queried all the time, instead of functioning as a static data warehouse like Apache Spark, or data projections must be finished first before queries can be run against the just-finished static projection like Neo4j does.

Almost all graph database products are built on X86 architecture as X86-64 CPU powered servers dominate the server marketplace. The situation has recently changed given the rise of ARM, due to its simplistic RISC (instead of X86’s CISC) therefore greener design. There are growing number of commodity PC servers basing on ARM CPUs nowadays. However, only 2 graph database vendors are known to natively support ARM-64 CPU architecture, they are Ultipa and ArangoDB, while other vendors tend to use virtualization or emulation methods which tend to be dramatically slower than native method.

The core hardware configurations are CPU, DRAM, external storage and network bandwidth. The number of CPU cores are most critical, as more cores mean potentially higher parallelism and better system throughput. Most testing beds settle on 16-core and 256GB configuration, however not all graph systems can leverage multiple cores for accelerated data processing, for instance, even enterprise edition Neo4j leverages up to 4-vCPU in terms of parallelization. If another system can leverage 16-vCPU, the performance gain would be at least 400%.

The table above illustrates typical hardware configuration for graph system benchmarking. It’s worthwhile pointing out that graph database is computing first, unlike RDBMS, Data Warehouse or Data Lake systems which are storage first and compute is 2nd class citizen that’s attached to the storage engine. In another word, traditional DBMS addresses I/O-intensive challenges first, while graph system solves computing-intensive challenges first. While both challenges may intersect with each other, that’s why a performance-oriented graph database should set both computing and storage as its first-class citizens.

The software environment is trivial as all known graph systems settle on Linux OS, and leverage container and virtualization technologies for encapsulation and isolation.

Data ingestion has a few indicators to watch out for:

Data volume concerns the total number of vertices and edges, plus complexity (or density), which is normally calculated using the following formula (for directed simple graph):

Where |V| annotates the total number of vertices, and |E| for total number of edges. Per this formula, the highest possible density of a smiple graph is 1. However, as we pointed out earlier, most real-world graphs are NOT simple-graph, but multi-graph, meaning multiple edges may exist between any two vertices, therefore it makes more sense to use vertex-to-edge ratio (|E|/|V|) as a “density” indicator. Taking Twitter-2010 as an example, its ratio is 35.25 (while density is 0.000000846). For any graph dataset with a ratio higher than 10, deep traversal against the dataset poses as great challenge due to exponentially complexity, for instance, 1-hop = 10 neighboring vertices, 2-hop = 100 vertices, 3-hop = 1,000 vertices, and 10-hop = 10,000,000,000.

Ingestion time and storage usage show that how soon can a graph database load the entire dataset, and how much storage space it uses on filesystem. Clearly, for loading time, the shorter the better. Storage space is less of a concern nowadays as storage is super cheap, different database systems may have quite different storage mechanism in terms of replication, sharding, partitioning, normalization and other techniques that may affect computing efficiency and high-availability. The table below shows the data ingestion performance of different graph DBMSes.