GraphSAGE (SAmple and aggreGatE) is a general inductive framework. Instead of training individual embeddings for each node, it learns a function that generates embeddings by sampling and aggregating features from a node’s local neighborhood, thus can efficiently generate node embeddings for previously unseen data. GraphSAGE was proposed by W.H Hamilton et al. of Stanford University in 2017.

Most traditional graph embedding approaches (such as those algorithms based on matrix factorization or random walk) learn node embeddings by using the information of all nodes during the iterations; whenever there are unseen nodes join the network, the model has to be re-trained by using the whole dataset, as these transductive frameworks do not naturally generalize.

GraphSAGE, as a general inductive framework, it trains a set of aggregator functions instead individual embeddings for each node. Embeddings of newly joined nodes can be obtained according to the feature and structural information of nodes without re-iterate the whole training process. This inductive capability is essential for high-throughput, production machine learning systems.

Visual illustration of the GraphSAGE sample (1) and aggregate (2) approach, the generated embeddings can be used in the downstream tasks such as label predication (3)

Assume that we have learned the parameters of K aggregator functions (AGGREGATEk), which aggregate information from node neighbors, as well as K weight matrices Wk, which are used to propagate information between different layers of the model or search depths. We train these parameters as described in GraphSAGE Train. The following is the GraphSAGE embedding generation process (i.e., forward propagation) in the minibatch setting:

Fixed-size sampling is beneficial to adapt the algorithm for minibatch, as the memory and expected runtime of a single batch is fixed. The authors of GraphSAGE found that the K does not need to be big, practically it could achieve high performance with K = 2 and S1·S2 < 500. 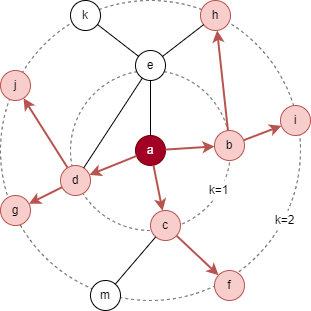 Take the graph above as example, when the parameter sample_size is set as [5,3], sampling of the target node a is done from a to the farther neighborhood. Neighborhood set N2(a) = {b,c,d} is gained during the first round of sampling, and N1(a) = {f,g,h,i,j} during the second round.

The parameter sample_size is an array of integers, the length of the array is the maximum search depth K, elements in the array are the number of nodes sampled at layer-K, layer-K-1, ..., layer-1 successively.

Sampling is performed from layer-1 to layer-K, while the subscript order of the neighborhood set is exactly the opposite (K, K-1, ..., 1), which is to match the next step of aggregating feature information of neighbors from the outside in.

For graph G = (V, E) and features for all nodes Xv (v∈V) are provided as input, Xv is formed by several properties of node and used as each node's initial representation vector: 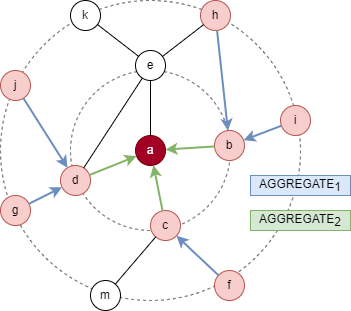 For the target node a in the above example: 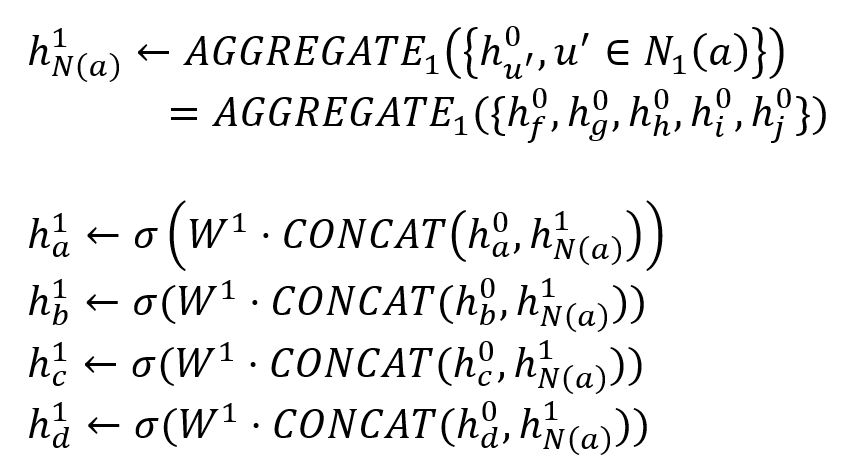 Lonely node has no adjacent node, hence it cannot generate feature information of any other nodes.

Nodes only generate feature information of neighbors in the same connected component.

Self-loop edges of node are ignored in the calculation.

For directed edges, GraphSAGE algorithm ignores the direction of edges but calculates them as undirected edges.