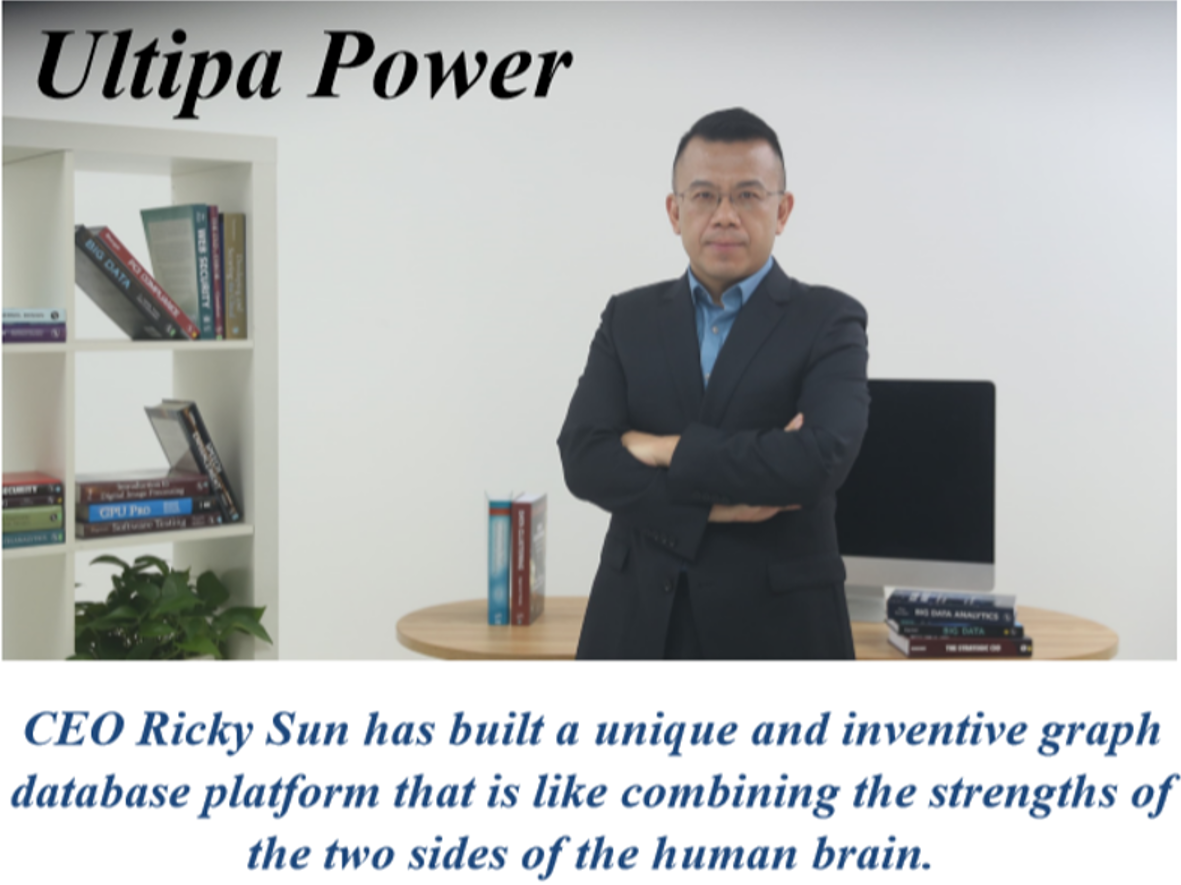 Ultipa founder Ricky Sun was recently interviewed by California Business Journal, the full article is live at https://calbizjournal.com/ultipa-rickysun/, and the full text from the article is posted here for your convenience of reading:

When Ricky Sun speaks about his graph database, the terminology is analogous to that of a parent talking about his child.

His lexicon of the graph system oft-trending toward human description, Sun is undoubtedly a proud father.

As he should be.

Founded in 2019, Silicon Valley-based Ultipa (ultipa.com), of which Sun is the CEO, tracks fast among the upstarts in the transition from traditional, relational SQL databases toward graph systems.

“Graph database focuses on finding the relationship between data; basically, it’s a high-dimensional data, meaning it’s far more flexible than traditional databases,” Sun says by phone from Beijing, where Ultipa is presently headquartered. “It’s also very much about speed. As we move into the third decade of the 21st century, we’re seeing big enterprises collecting lots and lots of data, and they need the processing power to handle this magnitude and the ability to deep-processing data. Traditional databases -- designed as far back as 40 years ago -- simply aren’t designed for that. With graph, you can model your data in a schema-free way and process it deeply and recursively with ease, compared to a traditional, relational database, which can be very rigid and slow.”

Expanding on the celerity, efficiency and elegance of the graph database, the CEO describes graph as a natural way of organizing and processing data, likening the system’s analytics and computing prowess to real-time exploration of human’s six degrees of separation as in social networks, or, instant identification of butterfly effect in a complex world of data.

He further sees his system akin to a human mind. “At Ultipa, we’ve built and continue to build a system that is very much like combining the strengths of the two sides of the human brain. Like the human brain, the left and right sides of the brain, which is essentially system 2 and 1, respectively; the left side is very logical, it processes and visualizes information, it can be seen as a knowledge graph -- but it's not necessarily ‘high performance’. Yet, concurrent with the left brain, the right brain works powerfully in real time and processes a lot of data, it can be seen as a graph engine.”

For Ultipa, becoming the world’s fastest graph system requires a real-time processing power predicated on the need for both speed and simplicity. Competing with larger entities in the chase to save milliseconds (or even microseconds), Sun sees Ultipa’s compact company size as an acute asset as graph systems have continued to pick up momentum over the past decade.

“This gives smaller players like Ultipa the opportunity to look into the problem, and give these larger companies -- with lots of data -- the path to develop very fast and in very agile ways,” Sun says. “Yes, there are some other players around the world with high-performance graph systems. But we’re confident that we can beat this competition by a huge gap because they’re not using this same concept or ideology as we are. We can process data hundreds of times faster than some of the competition. But in China, for example, it is very competitive, so we do need to fight for our business and if we can compete with some of these top companies, we can go anywhere.”

While many of the web giants -- Google, Facebook, Twitter, Alibaba -- have invested in and developed graph technologies, Sun says, “There’s some inertia that has been built into these bigger players,” noting most have done so only to the degree that “satisfies their own business needs,” before adding that graph solutions used by Internet leaders are not yet “general purpose enough to be adopted by broader industries like banks or financial service companies.”

Such industries -- banks, financial services, securities, and major enterprise ranging from telecom to health care -- have long been developing graph systems, which, with Ultipa power, can operate 10,000 times faster than traditional, relational databases or 100s of times faster than other big data frameworks.

“Major banks are dealing with a lot of data, mission critical data. For example, we’re currently working with one of the world’s largest banks, and their needs are incredible, so much so that the traditional technologies have lagged this big bank behind,” explains Sun, specifying 128-dimensional data points of Ultipa graph analysis per a banking transaction. “I’m talking about the graph system’s ability, in this banking example, to go over that many dimensions one-by-one and do so very quickly and in a highly concurrent way; the bank wants that processed in about twenty milliseconds. And the traditional database or other graph systems simply can’t handle that speed.”

With large banks processing tens of millions of daily transactions, the speed of graph presents newfound abilities, including, from the user vantage, a strengthened armor to assess fraudulence.

“For each transaction, their system is inefficient. This is where we can come in and really help: remodeling their data into a graph infrastructure, presenting lots of related data,” Sun says. “Along with faster detection of fraudulent activity and liquidity risk management, we’re talking about real time recommendation systems and customer analysis that can better serve us all as users.”

And, amid the ongoing months of COVID-19’s effect on the world, an enhanced use of online data and social distancing communication in lieu of interpersonal exchange has seen banks large and small evidencing a further need for Ultipa’s speed.

Those needs have kept Sun an active father of his in-demand graph. The Son of Sun is growing up fast during the days of virus.

“During the pandemic, major banks have been doing so much more online, and has basically forced these businesses to accommodate these needs,” Sun concludes. “For the smaller banks who were still on traditional databases, yes, the pandemic has motivated that online business.” 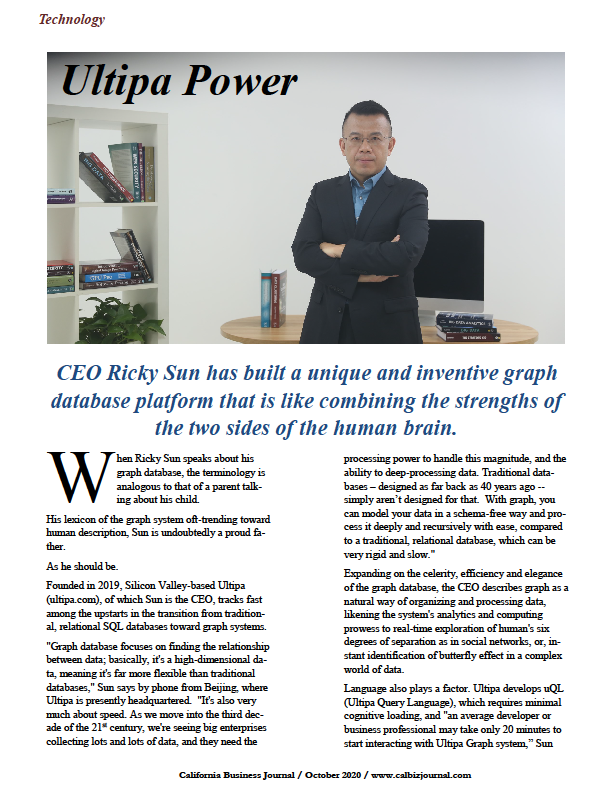 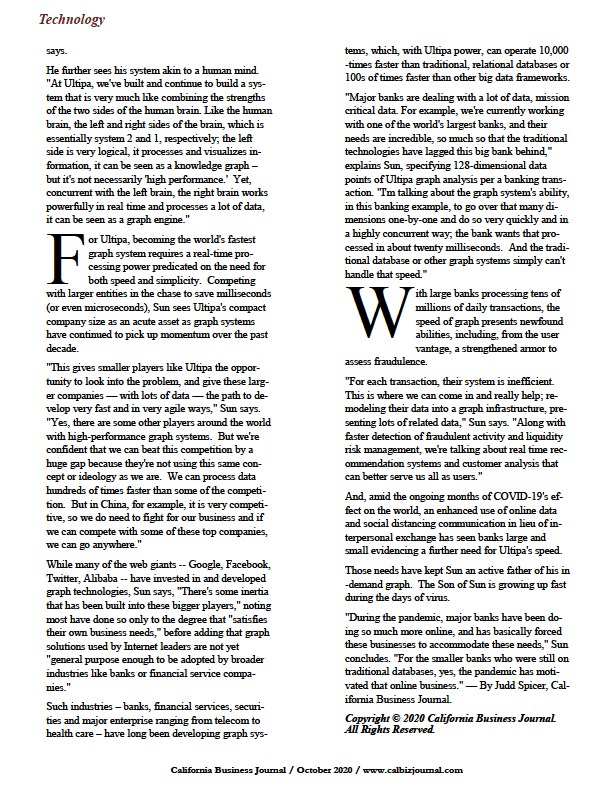