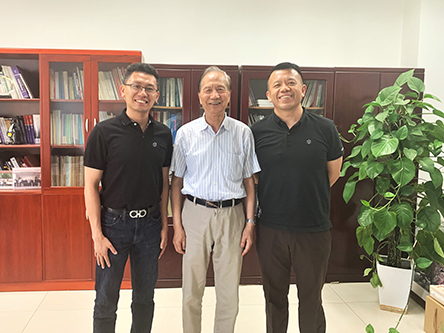 EEO.com.cn interviewed Prof. Zhang recently about his opinions on AI, they published the exclusive interview in a new release titled [The miracle of AI, in short term, will not repeat, and deep-learning has reached its glass ceiling]. During the interview, Prof. Zhang explained how deep-learning has reached to the current stage of dilemma, in other word, the glass ceiling, and breakthrough are much needed for the so-called 3rd generation AI, and he believes that explainable-AI and AI-with-robustness are the things lead next wave of AI.

Prof. Zhang was very excited to see Ultipa’s technology breakthrough on the infrastructure layer and great effort on graph technology and productization, which is quite rare in startups founded in China. He urged meeting participants that Tsinghua University, especially CS department should work with Ultipa as he believes the school lacks computing power and explainable-AI that offered by Ultipa Graph products. Both parties agreed that:

2.Knowledge graph clearly helps with white-box AI and explainable AI by offering a path via knowledge visualization, and by uniting with real-time graph computing, this is very much like uniting human’s left and right brain.

The two points made above is also in the core of Ultipa’s product lines:

Prof. Zhang, in his mid-80s, is still standing strong, energetic, articulate and holding solid grasp on the AI frontier, he spent well over an over exchanging news, thoughts and opinions on technological trends across the pacific and how AI will evolve down the road. Snapshots were taken after the meeting (see above).

Prof. Zhang, born in Fuqing, Fujian Province in 1935, admitted in to Tsinghua University in 1953, has been teaching for over 60 years in Tsinghua’s departments of automation, computer science since graduation. In 1995, he was elected to the highly prestigious China Academy of Science as an academician. In 2015 he was nominated and awarded the Life-time Achievement award. Starting in 2018, he took the hat of the president of Tsinghua’s AI Research Institute. For decades of devotion to AI and cognition technology research, he has been commonly known as the Father of China’s AI.

Ultipa Inc. builds the world’s fastest and most intuitive graph database – Ultipa Graph, which seamless combines the sheer computing power of real-time graph engine with an extremely framework of knowledge graph. Ultipa aims to empower connecting finding in real-time and helping solving business challenges by providing maximum data value extraction via fast and deep graph traversal. Ultipa is founded by a group of serial entrepreneurs and technology innovators who have no limited belief and are full of growth mindset. The team at Ultipa believes in the power of graph technology and is proactively working on creating the graph database technologies that will be the next generation mainstay database (replacing relational DBMS in short), on the other hand, they are making turnkey solution development super easy, often times shorten the development cycles by 80% or more, and with a much lower TCO, by 70%.
Other News more